Chopin-ing With Bryn and Finn 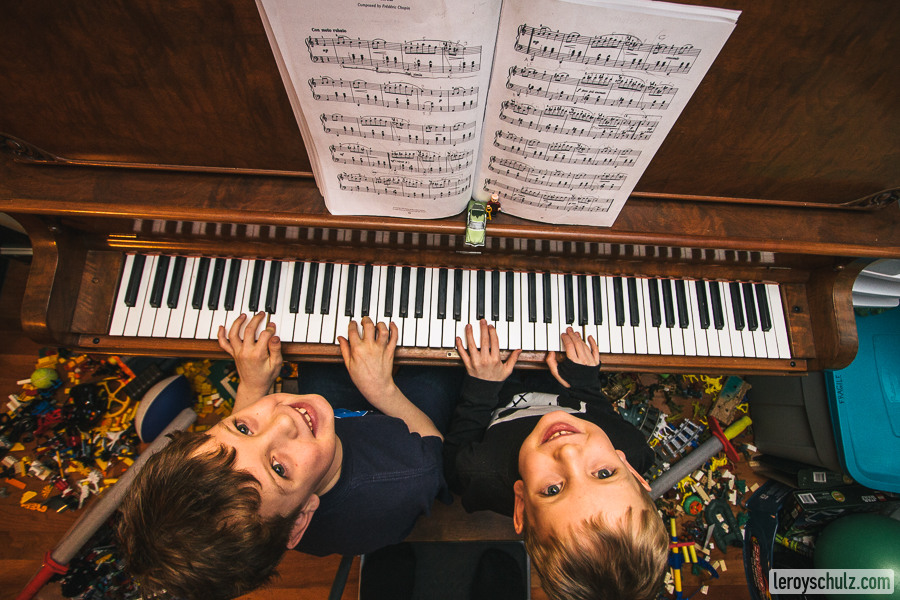 In between school, creating, exploring, sports, playing video games and music these two spend time perfecting their loving annoyance of each other and their parents, because that is what being part of a family is about.

People often refer to them together as Bryn-lee. They actually are each other’s best friends — and rarely ever fight.
Bryn’s first name is Brynioch (pronounced “Brin-EE-ock”), though some of the older generation prefer to refer to him as Brian or Brandon. He’s politely good natured and doesn’t bother to correct them.
Finnlee could not be Ferberized, because he would work himself into a tizzy and vomit everywhere, and only learned to sleep through the night when he was 6 years old. It’s only his incredibly sunny disposition, and winning smile that has kept him alive.
They would both prefer to be playing Minecraft or Skylanders right now.
Their mom wrote the following awesome poem about them: Prelude of spilling contents on the floor, setting up and rushed planning chatter, Suddenly the movement is in full swing with A clatter of blocks smashed down by a dinosaur and a plastic platoon plummets from paper planes Shooting: Rata-ta-tat…Interwoven with boisterous Young laughter and squeals of delight.
Second movement Structured notes delicate deliberate With mustered musicality repeated, punctuated with pauses and purposeful pounces of frustration upon the piano keys with growls of guttural exasperation. Stomping and protesting, contesting and finishing with the slamming of a door. Third movement Volley of staccato strained soprano argument, Am not, are too, am not, are too, am not…. interspersed with high hits of a foam sword, dart guns, or pillows and reverberant steady rumble of running shoe shod feet and crumpling bodies play-dying, like elephants in the living room as the Nanny Dog barks a dissonantly syncopated rhythm. The cacophony of childhood shakes the foundation in seemingly never-ending rounds and recitations. Much later, as the house settles into regular serene quiet Of empty sunlit afternoons, the spirit of the Concert of Children will be reminisced fondly and sentimentally missed.
They are among very few people who are in Miguelito’s Little Green Car more than once. They really are that awesome!