Posing With The Jacksons

What can possibly be said about The Jacksons that you don’t already know?  They are megastars that started off in Gary, Indiana and went on to achieve music stardom.  They have sold over 100 million albums worldwide, making them one of the best selling artists of all time.  Among their notable achievements and recognitions are several number one hits on the Billboard Hot 100 list, a star on the Hollywood Walk of Fame, induction into the Rock and Roll Hall of Fame and having two of their recordings (“ABC” and “I Want You Back“) noted among “500 Songs that Shaped Rock and Roll“.

[info]I asked them to guess the make and model of the car. Tito guessed Buick right away but the model stumped them (as it does almost everyone).[/info] [info]You can watch the taking of this photo on this CTV News Edmonton’s segment from Thursday, January 31, 2013.

[/info] [info]On Saturday, February 2, 2013, the Edmonton Sun ran a photo of the Jackson’s photo with Miguelito’s Little Green Car from a different angle.  See page 23 or click here for the electronic version of the page. 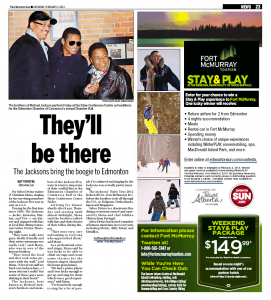